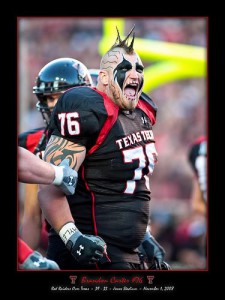 The Bears have a few holes to fill in the draft. Offensive guard is one of those positions, considering the Bears will most likely move Frank Omiyale to his natural position of right tackle. Garza will still man his right guard position, moving Beekman temporarily to left guard and back up center. Doesn’t leave a lot of depth.

Let’s take a look at possible guards available that will be available in rounds 3-7.

This guy is a monster. Literally, just look at the picture. He’s a strong pass protector, who delivers a punch and plays with a wide base. Rarely gets pushed back. Will reach to chip on nose (Kruetz will need the help) and defensive end. Will turn his man out of the hole on running plays and doesn’t let go until after the whistle. He’s intimidating and has the attitude to match.

Jerry is another strong pass blocker. Locks on and controls the pass rusher with his sticky hands. He just isn’t big, but very strong. He broke the Ole Miss record with 34 reps of the 225 lb bench press last year. Tommy likey. He also has a brother who was a first round pick and plays DT for the Falcons.

This guy has been labeled a “sleeper” on many draft boards. He has a strong anchor and rarely gets pushed back into the quarterback. He sets quickly, has good knee-bend, and extends his arms for maximum push. Comes off the ball quickly on running plays. At the East-West Shrine Game practices, he played all 4 exterior offensive line positions, showing off his versatility.