As a highly valued team member, you will obey and follow direct orders from the Head Coach. Knowledge of football helpful, but not required.

Must be able to work weekends in the fall, and some weekend travel is required.

You must have reliable transportation, preferably a running bus, to commute to and from Halas Hall and Soldier Field. 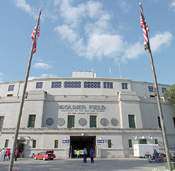 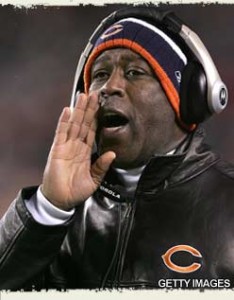 But somehow RB coach Tim Spencer and WR coach Darryl Drake kept their respective positions with the team. Well, obviously the Bears 29th ranked rushing attack and Forte’s 3.6 ypc was sufficient enough to keep Spencer (sorry, just threw up little). And Drake? Well, he ruined created the most expensive mediocre receiver in one Devin Hester. He also allowed Aromashodu to ride the bench for 12 games, and still hasn’t taught Rashied how to catch. Yeah, lets keep him around too. The Packers have two 1000-yd receivers and the Bears don’t even have one at 800-yds. Lovie hired both of these friends, I mean assistants, 6 years ago. Huh, interesting.

Of course, Lovie’s defense is still intact since they only gave up 45, 41, and 36 points in three of their games. Oh, and they gave up 47 points in two games to hapless Detroit Lions. At least Lovie is relinquishing himself of defensive play calling duties and is hiring a DC. I’m sure instead of hiring actual talent and coaching ability, he’ll just hire another BFF.

So Bears fans, lets prepare for the worst next year. And if the Bears go 8-8 and Lovie talks about the improvement, I swear I’ll need a straight jacket.

I do wish I could have been there when Lovie was firing these guys though……”I really like what you bring to this football team, but we need to make some changes, so we’ll just go from there.”

Crap, I gotta go….D-Mac is up on the ledge again. DON’T JUMP!