I, along with many other Bears fans, spent last week looking forward to spending a beautiful Saturday in the city capped off by watching our beloved Bears play their final home preseason game this season at Soldier Field. You can certainly imagine our dismay that from the opening kickoff on, the team seemed lackluster and failed to really accomplish anything on either side of the ball. We, as fans, understand that bad games happen (ie Chris Williams vs the Raiders) but this was more than that. This was an entire team failure vs a mediocre Cardinals team which was without their superstar wideout. Monday, however, it all became clear. I heard some post game comments you made which included calling the game Saturday night a “glorified practice”. I believe this is where the confusion lies, see we the fans paid full price for our tickets to a GAME, which you mistakenly thought was practice. As I understand it, we can come down to Bourbonnais and watch practices for free, but we pay full regular season prices to watch games at Soldier Field, be they preseason or otherwise. In light of this mistake on your part, I would appreciate a refund of my $160 for tickets to the game Saturday, since that is clearly not what you intended it to be.

Fill in the joke. 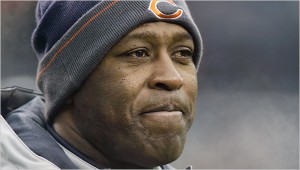 “We’ll play those that give us the best chance to win” – Lovie referring to the final three games of this abysmal season.

I saw this quote Tuesday morning and almost lost my Cheerios…Normally that is a quote you’d love to hear from your head coach.   In this case, however, Lovie is completely wrong.

First, the season is OVER.   Wins versus the hapless Lions or the second string Vikings (they will be resting starters for a playoff run) will not fool us into thinking you had a better season than you actually did.  The Bears finally admitted after the loss to Green Bay that they are eliminated from the playoff race.   When the season is OVER, you should be looking at the young prospects that may make a difference next year or the year after.  You should NOT be hanging on to the possibility of improving to a 7-9 record.

I will not go over Jerry’s drafting history as it will make me sick and I don’t want to ruin my laptop.   (the Bears are the only team in the NFL with a redshirt program)  Instead I will focus on the coaches.   Starting with the brilliant move to demote Alex Brown in place of Marcus Anderson a couple years ago.   Really?   We know this staff loves speed, but Alex Brown has been the one consistent positive on the defensive line over the last several years.   I am glad he had the fortitude to play through it and prove the coaches wrong.   Since Anthony Adams arrived he has been a solid DT but the coaches insisted on playing Marcus Harrison – their 2008 3rd round draft pick.  This year Harrison has 20 tackles and 1 sack as the starter.  The summersaulting back-up has 34 tackles, 2 sacks, a  fumble recovery and a pass defended.

The Linebackers…..well they were actually solid until they all got hurt…I understand it is hard to replace the former face of the organization, Pisa who was off to a great start, and Briggs – who is the best LB in the division.  But really, Jamar being unable to hardly find the field after a 20 tackle game?   Roach being put back on the bench for Hunter?   Once Briggs was back, it should have been and still should be Williams/Roach/Briggs.   Hunter may know the system, but he is too small and too slow to make plays.  ( I know he had a couple big plays in the last 3 games, but he misses as many, if not more)

The DB shuffle…..I have no idea why the coaches apparently hate Corey Graham….or why they have changed Danieal Manning’s position like 47 times since he was drafted….or why Bullocks is seeing the field all of the sudden after spending most of the season on the bench.  To the untrained eye, it would appear that the coaches have no idea who are the best players in the secondary.

ok, onto the offense….

Devin Hester.  That is all.

The rotating guards…either Omiyale is better or Beekman is better.   Alternating them is NOT.  Now, if the plan is for Beekman to move to center next year to replace Kreutz so they are seeing what Omiyale has, I withdraw this complaint….I sincerely doubt that is the case, however.

Devin Aromashodu…..the star of the OTAs….the star of training camp…..Cutler’s favorite receiver….It took him until Hester got hurt to see any substantial playing time….at which point he put up 8 for 76 and a touchdown.  Arguably the best performance by a Bears receiver this season….or last season….

Lastly, the kick return rotation….is it just me or would giving a single guy more looks be better than giving more guys fewer looks?  Manning and Knox are both solid kick returners but I do not think rotating them is doing either a favor.  If a guy sees something he thinks he can take advantage of  but doesn’t get another return the rest of the game how does that help?

The one thing the coaches do know, and I agree with…..Robbie is our kicker.

You might think I am referring to the pure football talent on the Bears….or the incredible “talent evaluation” of the administration…Incognito, no, they are completely lacking in both areas.  I am talking about the Rams guard who was released today.  He’s big, mean, and well, big & mean.   Something it appears to me is missing from the Bears O-line…yes, the very same line that whiffs on screen blocks, ends up 3 yards in the backfield on a 3rd and 1, and WILL eventually get Cutler killed. 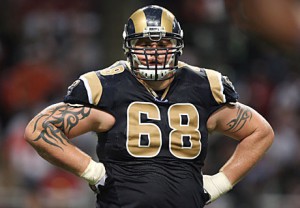 Yeah Zach Zaidman says forget it…9 major penalties (assuming those are 15 yarders) in 48 games…I say SIGN HIM TODAY.    Our doormat O-line is not even close to getting it done, and there will be plenty of cap room once they cut Pace (and won’t but probably should say adios to Kreutz and Omiyale as well)   Seriously, with the amount of penalties Omiyale is taking, can Incognito possibly be any worse?  The Bears are 28th I think in penalties per game, so he’d fit in just fine….and he may actually block someone.  (Imagine that!!!!)   Plus, I am curious how many penalties he draws…..like when Tommie went off on Douche Lutui (apparently a renowned cheap shot artist) on the Cards….That’s a win for Lutui that doesn’t show up in the box score.   The number one problem with this team is blocking….if he can block, bring him in.  It will help Forte.  It will help Cutler.   It will help whoever is the new offensive coordinator in 2010, and it may help Jerry Angelo keep his job another year or two.