The Bears need to add another pass rusher opposite Julius Peppers.  By not getting one in free agency, the Bears will now have to turn to the draft for some help.  Let’s take a look at some prospects. 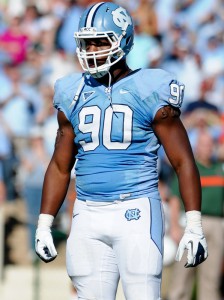 Coples has the size and strength to excel at the next level.  He has an excellent bull rush and can simply overpower opponents.  Explosive off the snap, and has the flexibility to dip and rip around the edge.  Needs motivation since he always doesn’t play with a high motor.  Not considered a “fierce” competitor, and sometimes takes plays off.  Could be a boom or bust pick, but the Bears might take the gamble if he’s still on the board at 19.

Motivated and works hard every snap.  Has speed off the edge, and uses second or thirds efforts to get to the QB.  Led the nation in sacks last season with 16 and forced fumbles with 9.  Not a great run defender but would be a great asset as a situational pass rusher.  While being a versatile athlete, some wonder if he was a one year wonder.  50/50 chance if he’ll still be on the board at 19.

First team All-ACC last year with 10.5 sacks.  Uses his initial quickness and long arms to gain the edge.  Has a good closing burst.  Not great versus the run, mainly a one trick pony.  Will have to put on some weight to routinely play in a 4-3 front.  Projected to go late 1st round or early 2nd round.  Might be a reach for the Bears at pick 19, but would be a steal if he’s still there at pick 50.

Jones leaves school after his junior year with 10 career sacks.  Times the snap well, and has a quick burst off the ball.  Athletic build and plays with urgency.  Can sometimes be washed out by a strong handed blocker, and doesn’t turn the corner consistently.  Has the frame and build to add weight and be really productive starter at the next level.   Will be selected in the 2nd or 3rd round.

Converted linebacker, Cam is still learning to play with his hand in the dirt.  Quick at the snap, accelerates low and with power.  Has the ability to shoot the gap consistently.  Good against the run, tracking ball carriers across the field.  Not a natural pass rusher, and will need coaching and technique.  Because of a knee issue last year, he could fall to the 3rd round.