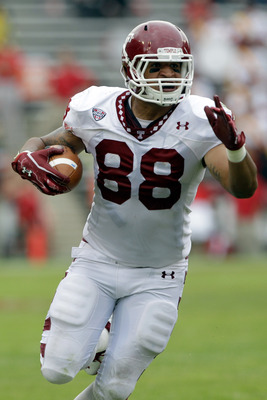 This is a little bit of a surprise.  I really thought the Bears would go with a DT here, especially with Mike Daniels (who the Packers later selected) and Jared Crick still on the board.  Rodriquez is a hybrid back, and can fill the FB role when needed.  He’s got great speed for his size clocking in a fullback best 40 time of 4.58 at the Combine.  Also uses his 36″ vertical to his advantage.  I runs a great FB flat route and can fly on seam routes when lined up at TE.  He often gets compared to Patriots TE Aaron Hernandez.  Let’s hope he plays like him too.  He’ll create competition for Tyler Clutts at starting FB, and should overtake Kyle Adams for the Bears 3rd TE spot.  The Bears tried to use Adams in that hybrid role last year with little success, and Clutts just doesn’t add much value in the passing game.

Overall, I like the thinking behind this pick, but I question this pick in the 4th round.  Without having a 5th round pick, the Bears must have felt he wouldn’t be there in the 6th.  He was projected to go in the 5th-6th round.  Nfldraftscout.com did have him ranked as the #1 FB prospect though.  We’ll have to wait and see how this plays out.