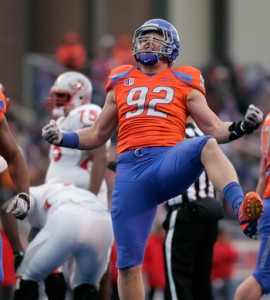 Well, where do I start?  It was a little bit of a shock to me.  I was thinking that McClellin was probably going to the Patriots at 27 or the Packers at 28.  And rumor has it both of those teams were looking at trading up to draft a DE, possibly McClellin.  After the Bears picked, the Pats did end up trading up to select Chandler Jones, the guy I thought the Bears would take.  Jones along with Whitney Mercilus seemed to be the popular pick at 19 amongst Bears fans, including myself.  But I’m willing to give this country bumpkin a shot, unlike a majority of meat head Bears fans.  Oh, and I loathe those idiot fans that hate this pick for the simple fact that they don’t know anything about him, or they thought Riley Rieff, an LT that is projected to play RT, would have been a better option.

After spending a few minutes educating myself on Shea McClellin, I started to really like this pick.  He reminds me a lot of Clay Matthews, minus the flowing locks and steroid use.  He has a similar style of play and relentless pursuit to get to the QB.  Some people just have that knack for getting in the backfield, and Shea has that.  McClellin actually ran a slightly faster 40 time at the Combine than Clay did too.

All I know is that I’m happy that the Bears used their 1st round pick on a pass rusher.  Only time will tell if this was a great pick or not, and I’ll be keeping an eye on Whitney Mercilus in Houston, and Chandler Jones in New England to see how this selection plays out.  But for now, I’m willing to give Emery the benefit of the doubt, and be excited for our farm boy sack specialist.  Bear Down!