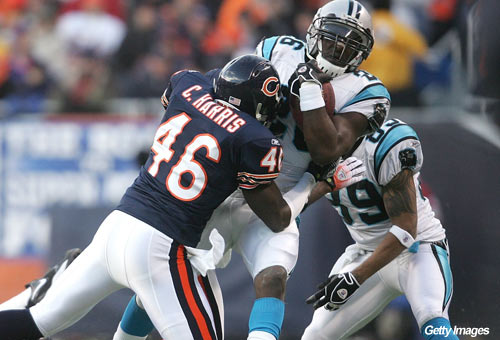 On Tuesday, April 27th, the Bears traded LB Jamar Williams for Panthers SS Chris Harris.  Harris was dealt to the Panthers less than 3 years ago, and now rejoins the Bears to finally solidify the Strong Safety position.  Look out NFC North receivers, the Hitman is back.  The only person in Chicago that is not thrilled with this trade, is safety Kevin Payne, who was consequently just traded to the St Louis Rams for an undisclosed draft pick.

So Jerry Angelo said the was looking for 3 potential starters from his 5 picks.  Haha, good one Jerry!  Maybe starting for the Rams.  I’m sorry, but when you only have five picks, you can’t draft just on value, you must fill your needs too.  Let’s take a look at the Bears picks and see where it all went wrong.

Wright was the best FS available at pick 75.  Why? Because Angelo got bitch-slapped by Packers Ted Thompson.  The Packers traded their 3rd (86) and 4th (122) rounds picks to move up to pick 71 to grab FS Morgan Burnett of Georgia Tech, just ahead of the Bears.  Maybe the Bears would have taken Wright either way, but we’ll never know.  While both are quality picks, it will be interesting to see which FS pans out.

This was strictly a value pick and a risk the Bears could not afford to take with only having 5 picks.  Not only is he coming off a knee surgury, but he can’t even jump out of a pool.  And didn’t the Bears just spend 80 million on another DE?  So now Wootton will join Peppers, Idonije, Anderson, Gilbert, and Melton at defensive end.  The Bears should have taken CB Akwasi Owasu-Ansuh (6’0″ 207, Indiana PA) here.

The Bears targeted Webb as a potential free agent, but they were scared he’d be taken later in the 7th round and never make free agency.  Ah, a Mike Tice project.  I’m ok with this pick, has potential to be a diamond on the rough.  Only other player I might have gone with here is OG Brandon Carter (6’6″ 329, Texas Tech), who ironically is a free agent now.  Go get him now Jerry! 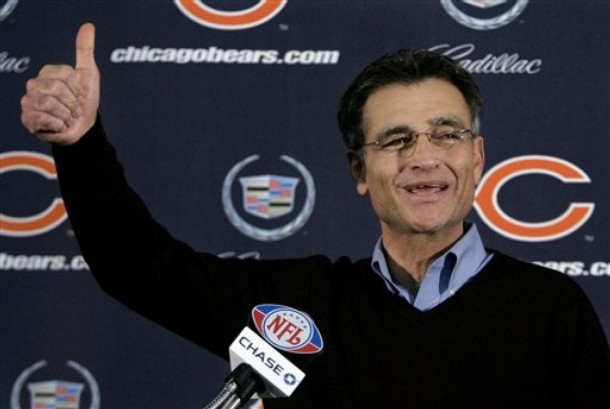 Well, it’s that time of year again.  Time for Jerry Angelo to prove that he has no idea what he’s doing.  But, luckily for him, I’m here to help this year.  I even threw in a couple Dan Bazuin Jerry picks to make it look like his own doing.  As it stands now, the Bears only have 5 picks, rounds 3-7, with 1 pick in each round.  That being said, I have this feeling that Mr. Angelo is going to make some kind of trade to gain an extra pick in either the 2nd or 3rd round.  Because of this unknown, I’ve decided to make not 1, but 2 mock drafts.  Don’t worry Jerry, I will only charge you for one.  The first mock draft is if the Bears pick up a 2nd round pick, and the second mock draft is guessing they’ll pick up another 3rd round pick.

If the Bears pick up a 2nd round pick:

If the Bears pick up another 3rd round pick:

Well, there you have it.  I’m hoping to get at least a few right, but with my luck and Jerry’s IQ, he’ll just draft 5 more TE’s. 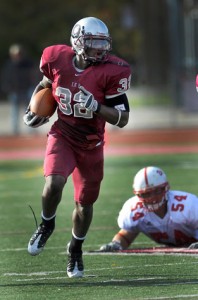 The Bears are quietly coveting some Cornerbacks before next weeks draft.  Some project as more of a Free Safety in the NFL, which would be nice, but some quality depth at corners would be a smart pick too.  Currently, Zachary Bowman looks to start opposite Charles Tillman, with Corey Graham backing them up.  Newly acquired Tim Jennings best fit seems to be at nickel back.  Unproven  DJ Moore will likely struggle to see the field again this year.  Here are a few possibilities to add depth and also some Safety prospects:

Despite his lanky frame, Murphy is one of the biggest hitters in this years cornerback draft class.  Willing and physical tackler on the outside.  Uses a good burst and his 4.50 speed to track the ball in the air.  Can play press coverage, but seems more comfortable in a zone defense.  While sometimes a step slow getting to a receiver in his zone, he will lay that receiver out.  Extremely tough, and uses his long arms to break up passes.  Would be a good value pick if he falls to the 3rd round.

Plays with aggression at the line, while showing good flexibility and footwork in his backpedal.  Could flourish in a zone system at the Free Safety position.  Oh, and he’s fast…real fast.  Ran a 4.32 40-time.  Also has excellent hands, and is strong enough to snatch the ball out of the grasp of receivers.  You might want to start practicing pronouncing his name, because, well, he is also a great kick returner.  Some scouts have him being taken in the 2nd round, but a shoulder injury might drop him into the 3rd and even early 4th. (pictured)

Very experienced zone corner.  Has great awareness of receivers and the ability to close in either direction.  Has great hands, and can adjust to the ball to make a play.  A good tackler, registering 124 tackles his last two seasons at Iowa, showing a willingness to support the run.  With his 4.52 speed, sometimes gets caught behind a receiver.  Will need to use his instincts and not get fooled with double moves.

With his size and good read and react skills, has the ability to play Safety at the next level.  Recognizes and diagnoses routes, then puts himself in great position to make a play on the ball.  Can read the action in the backfield in order to jump routes.  Plays the run well, is a secure open-field tackler, and is willing to lay the wood when called upon.  Uses his 4.42 speed and agility to play multiple positions in the defensive backfield.  Since it seems that Jerry Angelo’s main goal is to fill the entire roster with Vanderbilt Commodores, don’t be surprised if he jumps on Lewis in the 4th round. 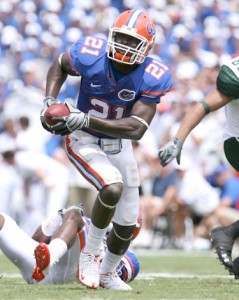 Luckily for the Bears, the 2010 draft class is full of quality safeties.  The Bears have a roster full of Strong Safeties, but absolutely no quality or depth at the Free Safety position.  While I’m still holding out hope for OJ Atogwe to come fill that need, some depth certainly wouldn’t hurt.  I’m also looking for someone that could make an impact on special teams….and not at kick returner.  While I’d love for Georgia Tech’s Morgan Burnett or South Florida’s Nate Allen to fall to the 3rd round, it’s just not going to happen.  So let’s take a look at some other  possibilities.

He reads and reacts quickly to the ball and gets there with excellent footwork and straight line speed (4.47 40-time).  Has plenty of range over the middle and is quick to come downhill in run support.  Closes quickly with good ball skills, and can deliver a good pop when needed.  NFL scouts believe he’ll make an immediate impact on special teams with his physical play.  While he has improved every year at Florida, he is coming out a year early as only a junior.

Kam switched from Strong Safety to Free Safety as a junior, and did struggle at times.  But his physicality and great open field tackling made up for his 4.58 speed.  Has great instincts, particularly in zone defenses, but is still an unfinished product.  He is a pure athlete, and could help on special teams immediately.  I’m just afraid that he might make a better Strong Safety at the NFL level.  But with his size, it might be worth the gamble.

Very versatile and won’t be a size-speed mismatch regardless of where he lines up on a given down.  Reads quarterbacks eyes, and anticipates throws underneath.  He’s intimidating roaming the deep half with his 4.50 speed and will pound a receiver over the middle when needed.  Can line up on a slot receiver when needed and can fill holes against the run.  He is a secure tackler and another player that could make an immediate impact on special teams.  He also can return kicks, so dumbass Jerry Angelo will probably trade up to get him.

Has only adequate 4.59 speed but good instincts.  He is rarely out of position, and can locate the ball quickly.  Can line up all over the field and can handle mulitple assignments….Lovie’s dream safety.  With all that being said, with his size and only average speed, he might be a better Strong Safety.  But I believe he is someone you can’t pass on if he’s still available in the 6th round.  Added bonus:  he’s actually smart, real smart.  After gradutating from FSU, he spent a year at Oxford as a Rhodes Scholar.  Maybe he can teach Devin Hester how to read.

Takes proper angles on receivers coming over the middle and can properly track the ball in the air.  Has good range and can break up passes using his height.  Has decent straight-line speed (4.56), but it’s his ball skills and good instincts that make him a valuable late round pick.  Does struggle with man coverage, so Lovie’s Cover 2 defense might be the perfect fit for him.