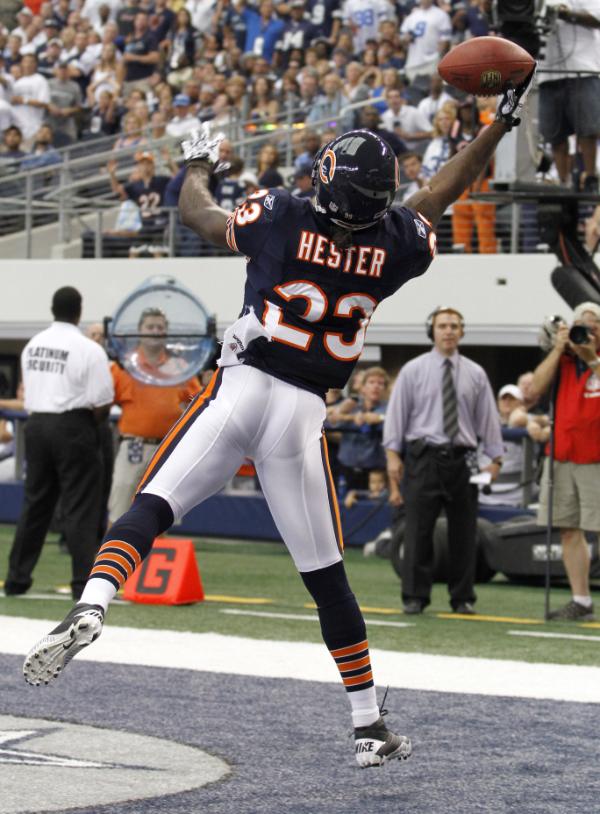 Big win for the Bears over the Cowboys!  Here’s some things I saw during the game.

* Hey refs..throwing the flag on the blatant facemask to Jay Cutler would have been nice.  Bears would have had the ball at the 50 yd line and a 1st down.  At least Anthony Spencer got fined $5000 for it.

* Well, at least the headsets worked this week.  Now if the can only figure out how to adjust the “volume” so Jay can actually hear the play.  Idiots.

* To the offensive line:  Hey, we know you can’t block, but can you at least help Jay up when he gets killed?  Thanks.

* Oh, and why is it that the refs always help Favre up, but I have yet to see them help up Jay? Must be a Grandpa thing.

* So far it seems like the special teams are the weakest phase for the Bears.  A punt got returned on them, and Hester is still running backwards.  Get on it, Dave Toub!

* Tim Jennings made a great heads up play.  Cowboys pooch kicked in the air, and since the ball didn’t hit the ground, Jennings called for a fair catch.  Genius!

* Lovie still doesn’t know when to challenge.  Seeing the replay once, I knew that the Cowboys ball carrier was clearly down and the ground caused the fumble.  The big ass tv above the field must not be big enough for Lovie.  Well, at least he didn’t call a time out first.

* I loved on the 3rd and short qb sneak that ol’ wiley Olin Kreutz already moved the ball across the line before the snap.  Nice veteran move.

* Mike “Mad Scientist” Martz.  Keep blitzing please, while he goes 4 wide and scores in 2 plays.  Thanks.

* Attn Tommie Harris:  Anytime you want to show up, it would be nice.  That goes for Mark Anderson too.

* Matt Toeiana had another nice game.  They can’t run the ball with Toe and Anthony Adams in the middle.   Bears are currently #1 against the run.

* At some point the Bears have to get the running game going.  Ranked 28th.

* Major Wright with another injury and on the shelf for 4-6 weeks.  Not to worry, Craig Steltz is back this week….ugh.

* In the Week 1 Quick Hitters, I dogged on DJ Moore.  He then goes out and has a 2 interception game.  Nice job DJ, but I will NOT apologize until I actually see you hit someone.

* Speaking of hitting…Chris Harris is a beast.  That is all.

* Charles Tillman is the best in the league at hitting the ball out. Period. We could use a few more on Monday Night Peanut! 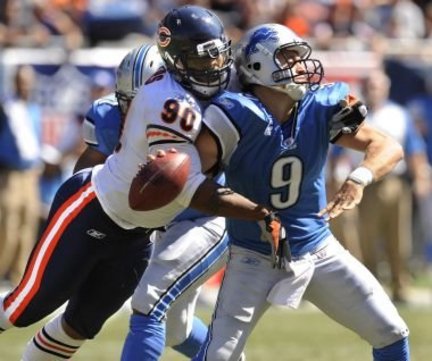 Here’s some news and notes from the Bears lucky last minute win over the Lions.

* Can the Bears find some headsets that work please?  On the second play Cutler was already pointing to his helmet unable to hear the play.  Stop shopping at Radio Shack, thanks.

*Forte had 151 receiving yards, showing that the Bears can now run a successful screen play.  Welcome to the 1980’s.

*Devin Aromashodu had 3 drops.  One was for a touchdown, and the other two he took a big hit on.  You’re going to get hit anyway, catch the damn ball please.

*Bears went with an uneven line once.  Omiyale went over to the left side next to Chris Williams as Manumaleuna lined up next to RG Lance Louis.  Interesting formation, now if we only can get Omiyale to line up near the bench.

*On goal line plays, lets put Omiyale in the backfield, since that’s where he usually ends up anyways.

*Matt Forte and Chester Taylor lined up in backfield together, pick your poison opposing defenses.

*Bears need to stop fumbling.  Forte fumbles at the 26 yard line, and Greg Olsen at the 8 yard line.  Stop it, no, seriously, STOP it!

*Pisa Tinoisomoa had a nice quiet game.  On one running play he blew up the pulling guard AND the fullback, clearing the way for Urlacher and Bowman to clean up.  On another, he took out the pulling guard while still maintaining the edge, turning the ball carrier back inside where help was waiting.   Keep doing the dirty work Pisa!

*After Pepper’s strip sack, the Lions figured out how to stop him…….it’s called holding.  And they did it well.

*Urlacher hit everything in sight.  Just do it BEFORE the whistle.  Thanks.

*Briggs had some huge plays.  Shooting the gap causing a fumble on the handoff and recovering at the 1 yard line was huge.  Now, if the Bears could only find a way to score from there.

*Lions couldn’t run a screen.  Of course, it’s hard to when Briggs rips the running back to the ground and then chases after the QB.  Then as the running back attempted to get back up to keep the play alive, Tommie Harris put him back on the ground.  Incomplete.

*Ok Lovie, you fooled us.  You made us think that DJ Moore was a real football player.  But the joke is over, get him off the field.  Put Manning back at nickel please.

*Ex-running back and now 260 lb Henry Melton should be in the backfield on short yardage and goal line.  Make it happen Martz!