Twas ten days before Christmas, and under the lights,
It was Bears versus Saints, football on Monday Night .
Both teams five and eight, the coin toss in the air,
Saints elect to defer, the start of this nightmare.

The Bears were down early, with no fucks left to give,
The offense is atrocious, the defense a sieve.
Saints get to Cutler, he’s sacked under a pile,
As Jay gets up slowly, why doesn’t he smile?

Brees would take over, placing the ball all around,
To the endzone, past Jennings, for his 2nd touchdown.
Bears try to run the ball, to set up the pass,
With no holes to run through, Forte’s flat on his ass.

This season just dreadful, more absurd every day,
Then Trestman announces, he’s gonna bench Jay.
I fly off the handle, THIS STAFF IS INSANE,
Then I whistled, and shouted, and called them by name!

“Fire Trestman, fire Tucker, that would be awesome,
Fire Kromer, fire Phil, don’t want to see Clausen!
To the worst of the North, to the joke of them all,
Now fire away, fire away, fire them all!”

Speculation begins, where Jay will be traded,
It’s really too bad, our best QB is this hated.
Dumb fans love Jimmy, claiming he can’t be much worse,
Versus the Lions defense, ha, he’ll leave in a hearse.

It’s now the 4th quarter, and the Bears are down six,
The game should NOT be this close, but Stafford threw picks.
Clausen drives for the win, and gets hit in the head,
Throws an interception, completely shitting the bed.

Some think Clausen played well, as my head shakes in disgust,
He played with fire they said, umm, no, he was concussed.
The podium after, Trestman can’t seem to explain,
The Bears practice so well, just not in the game.

This whole franchise is a joke, completely a mess,
As Jay starts this week, I bet he couldn’t care less.
I’ll watch the Bears, one more time come this Sunday,
In hopes that MY CHRISTMAS, will be on Black Monday.

Now sit back and RELAX, next year will be better,
I know this because, I sent St. Nicholas a letter.
To bring Harbaugh to the Bears, with Super Bowl in sight,
Merry Bearsmas to all, and to all a good night! 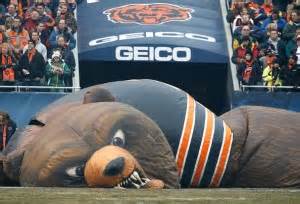 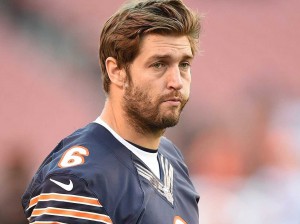 The Chicago Bears have many issues right now, from bad coaching to historically bad defense.  How  bad you ask? The Bears defense is 32nd in points against, and 26th in yards against, including 30th against the pass.  Oh, and don’t get me started on the special teams.  But the focus of the criticism seems to be around the underachieving offense, notably the QB position.

All I’ve heard the last few weeks is that the Bears MUST get rid of Cutler.  He’s the problem!  I’ve seen numerous articles about his contract and the cap hit the Bears would take if they out right cut him, or potential teams they could trade him to, like the Titans for example.  That’s great!  Good thinking guys!  Except that leaves the Bears without a starting QB.  Not a single one of these idiots who wrote these articles gave a solution for this, except “draft a guy.”  Sadly, many Bears fans right now are saying the same thing.  Oh, ok, because it’s that simple.

Rd 1 (#22) – Johnny Manziel  – He couldn’t beat out the great Brian Hoyer for the starting QB position.    Note that Hoyer has a 82.3 QB rating and a 55.9 completion percentage. (Update: Manziel might get his first chance to start this week).

Rd 3 (#75) – Russell Wilson – Super Bowl winning QB has started every game in his career.  Has a QB rating of 93.0 this year.  Wilson doesn’t have to be stellar, just efficient since the Seahawks defense is 4th this year in points against, and 1st in yards against.

Just remember, for every Aaron Rodgers, there are many more Christian Ponders and Geno Smiths.  The Bears have a top 12 QB (stat wise).  Would I like a top 5 QB?  Sure, who wouldn’t?  But please stop expecting miracles from the draft.